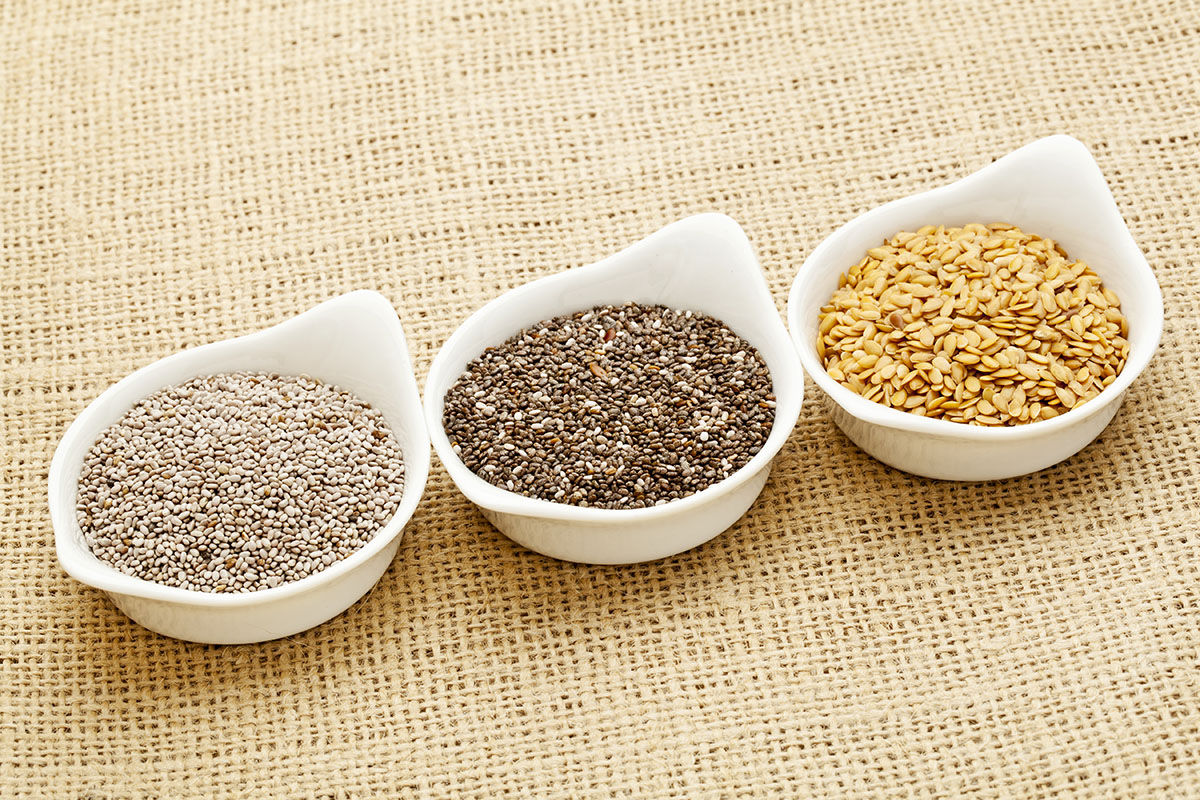 They’re both scientifically proven to be better when grounded rather than whole, but which can be considered more beneficial to our bodies, chia seeds or flax seeds? When evaluating the research into either seed, there are a couple of red flags to consider.

Beginning with chia seeds then first of all, and you would expect us to know a great deal about them given that we have been eating chia seeds for more than 5,000 years. Exceptionally high in fibre (even higher than flax seeds), chia seeds are also considered “one of the most signifcant natural sources of omega-3”.

An interesting point made in the opening of this blog post however is that both flax seeds and chia seeds are best eaten when ground up. As has been found in experiments, even eating two tablespoons of whole chia seeds every single day for ten weeks leads to no change in omega-3 levels. Yet, the same amount of ground chia seeds did lead to a significant increase in blood levels of both short-chain and long-chain omega-3s. Furthermore, there was “no influence on inflammation or disease risk factors”.

Now, the “no influence” point is the important part here, as previous research in this area had in fact claimed chia seeds to reduce C-reactive protein levels (and therefore reduce systemic inflammation) in comparison to a placebo. However, this previous research needs to be looked at twice.

When looking at the data closely, it is only because there was a significant worsening in the placebo group that was given two tablespoons of wheat bran a day instead that those on chia seeds seemed to be benefiting. It’s not that the chia group got significantly better; the control group just got noticeably worse.

But why did the researchers frame their results in such a way? The explanation is normally linked to funding, as eventually proved to be the case here, but not until five years later.

As you will have likely guessed by now, the researchers were funded by a chia company. And as this ‘statement of clarification’ also reveals, the main investigator had filed a patent to use chia seeds to treat diseases. The team had clearly worked hard to ensure this information was able to be hidden, since they claim that the reason for not providing this clarity when originally publishing their study was that the journal “did not specifically require” the disclosure of such information.

Side note: the patent has since been abandoned which is likely due to a similar study finding that there were no noticeable benefits for weight loss, blood sugar, cholesterol, blood pressure, or inflammation after eating a quarter of a cup of chia seeds every day for 3 months.

In contrast, one finding of the original piece of research that has been replicated by other authors was a significant drop in blood pressure linked to chia seeds. That being said, this effect was still not as potent as it is with ground flax seeds.

Perhaps the strongest trait of flax seeds though is there super high lignan content - averaging about 15 times more than other seeds, including sesame and chia seeds. It is this lignan content that is thought to explain the strong anti-cancer effects flax seeds have both in terms of prevention and survival.

So, given all this research and the question marks over some of the chia seed claims, you may feel that this post is slightly leaning towards flax seeds rather than chia seeds.. but we are staying neutral! Let us know what you think and if you swear by either of the seeds on social media!